A few days ago YouTube user “Radio AlternativeMusic dot com” shared a rare video recorded backstage in Rochester on 8 November 1993. Today the same user posted a second video including the first 3 songs of that show recorded from the left side of the stage. The video also includes the backstage footage after.

YouTube description says “at the Horizontal Boogie Bar in Rochester” meaning the first video marked as recorded at Water Street Music Hal was indeed a mistake.

A true rare and never seen before gem! 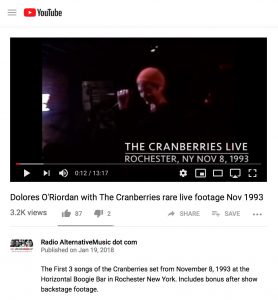