You are here: Cran World » The Cranberries » What songs for Everybody Else’s 25th Anniversary album?

What songs for Everybody Else’s 25th Anniversary album?

As you may have already seen on socials, earlier today The Cranberries posted a video and a photo on Instagram from the famous Abbey Road Studios in London where they are currently remastering “Everybody Else…” for the album’s 25th anniversary. 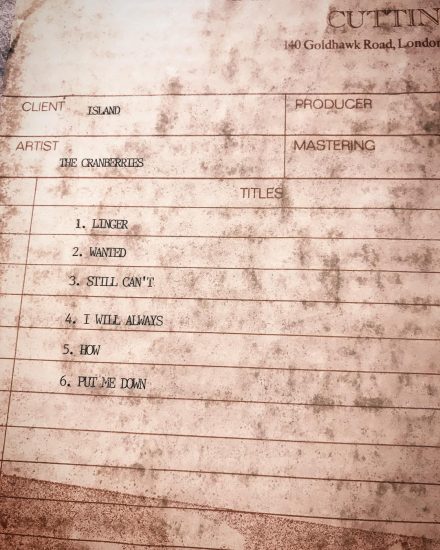 As a reminder the classic album counts 12 tracks:

and the “Complete Sessions” album released in 2002 added 6 more tracks:

Let’s note the band earlier mentioned they would be including some unreleased tracks and other bonus material from the era on this anniversary edition of the album. The fans already know of 5 unreleased songs from this period, thanks to bootleg recordings, as some of these were played a few times live in concert in the early years:

A IOSA
FALSE
LIKE YOU USED TO
SAME OLD STORY
SERIOUS

The question is… have all these songs been recorded in studio back then?
And what about some more unknown songs we would never have heard about, is there at least one or two somewhere?
Could the 25th Anniversary Album be an ultimate double CD/LP including all those 23 or more songs?
Time will tell… but today, the remastering has just started and it’s a bit of a nice news at this difficult time!

16 Responses to What songs for Everybody Else’s 25th Anniversary album?