The Guardian just edited their online version of their interview with the lads as there were a few mistakes. Read below the notification added in the very last lines:

This story was updated to correct two errors. The Aer Lingus incident occurred in 2014, not 2016. At the time of her death, O’Riordan was in London to mix a record with her side project D.A.R.K, not to record vocals for Bad Wolves.

Furthermore, the article now features another amendement regarding the name of the album. “THIS IS THE END” has now been replaced by “IN THE END”… Could that be another mistake that hasn’t been listed in their “update list”?

Let’s not numerous fans have already been commenting on how heartbreaking “This Is The End” sounds, so let’s hope this time The Guardian got the title right…

1st version with “This Is The End” 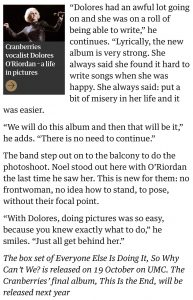 2nd version with “In The End” 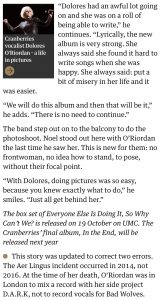 The guardian edited their online article for the second time, again amending errors, although this time the name of the album hasn’t changed. So now looks very likely that “In The End” will be the title of the ultimate album.

We may thus wonder if this was a mistake from the journalist – as we can imagine that The Guardian would have listed this error on their “update list” while amending the article for the 2nd time – or if the band has decided to change the title between Sept 3rd and yesterday, thus requiring an amendment once the article was already printed.

3rd version still with “In The End” 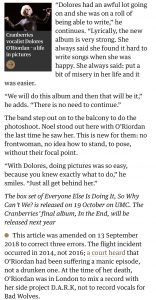 Here’s also below the hard copy of the newspaper, shared by ‘The Cranberries Newspaper’ on Facebook, thanks to them. It appears that the printed paper features a different photo of the lads and the first version of the article, meaning the album title mentioned is “This Is The End”. 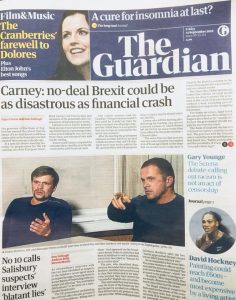 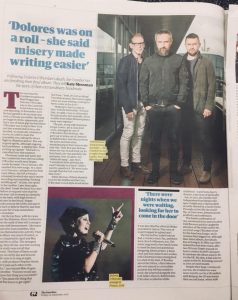