You are here: Cran World » Other News » Dolores and her classmates receiving special award in 1989

Dolores and her classmates receiving special award in 1989

Instagram user joanna.cran.pic posted a very rare clipping of the Limerick Leader published on 24 April 1989. Dolores and her classmates won “Slógadh ’89” (an Irish nation wide arts festival for young people) and received a special award, “An Gradam”. It was 30 years ago!!! 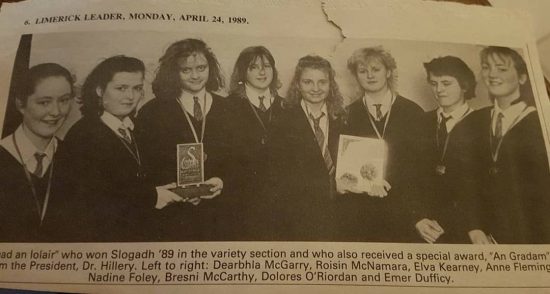 More about Slógadh
In 1969, Gael Linn established a competition based youth arts festival, Slógadh, involving several local events and culminating in a national final. This event was to prove one of the great successes of the Gael Linn calendar for many years. Activities included singing, storytelling and the visual arts.

The Slógadh music competitions catered for all kinds of music – traditional, pop, country ‘n’ western, classical, solo singing, choirs, musicals and solo instrumental. There were competitions for one act plays, miming and the traditional art form – the agallamh beirte. The festival was not limited to stage competitions. There were important art and literary sections also. The side events were often as important as the competitions themselves. Impromptu music sessions, discos, céilithe and poetry readings formed an integral and important part of the festival.

Above all else, Slógadh gave Irish a new relevance for the young generation. It became a living medium of modern artistic expression. At its zenith in the early eighties, over 50,000 young people were involved annually one way or another. It was through Slógadh that artists such as Clannad, the Hothouse Flowers, Altan and Dolores O’Riordan first gained recognition. It was in Slógadh that Cathal Ó Searcaigh, one of the most promising and prolific of our contemporary poets, came to the attention of the literary public. No other youth festival of its kind in Europe, with the exception of the Urdd Eistedfodd in Wales, could compare to it in scale or in the scope of its activities. Young people from the four corners of Europe – from Wales, Scotland, Brittany, Flanders, Occitania and Slovenia, to mention but some-traveled to Ireland to experience it.