You are here: Cran World » The Cranberries » The Hogans great great grandfather

Here’s an interesting discovery we wanted to share:
As some of our team members were browsing old Irish 90s papers, we found out in a 1993 Limerick Leader article that Noel & Mike happen to be the great great grandsons of Michael Hogan, a poet known as “The Bard Of Thomond” in the 1800s.

Some of you might already have heard about this as, in 1999, Noel & Mike helped to reissue the poems and songs of their ancestor, according to an Irish Times article.

But our discovery did not stop there! As we read more about The Bard Of Thomond, we realized that a life-size statue of the Hogan’s great great grandfather is actually to be found at King Johns Castle Plaza in Limerick, that is to say… right in front of Dolores’ mural painted in 2019 by Aches! 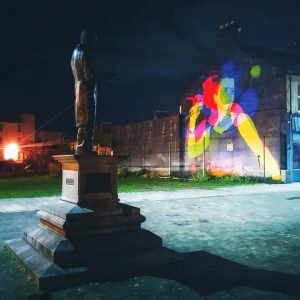 Michael Hogan – The Bard – and Dolores, facing each other 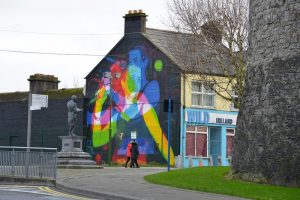 Special thanks to CranberriesItalia for the wiki link!