A couple of weeks ago, in an interview with Kyle Meredith from Consequence of Sound, an anecdote from Fergal grabbed our attention (28:12 on the video) as he was mentioning owning an award that did not sound familiar to us, “There was an award we got actually once, which was like a mini couch, where the button holes would be at the back of the couch were two cds, for No Need To Argue it was.“

Time passed and we assumed Ferg was likely speaking of the US NNTA 5x platinum award, although the description did not quite exactly fit.

To our greatest delight and surprise, Mike shed light on this mystery a few days ago as he randomly came across his copy of the so called “mini couch” and shared a preview of this gem on Instagram (stories).

As you may have noticed, we’re not used to sharing the content of the lads’ personal social media accounts, but as a collector database, we decided to break our rule for once as this was much too exciting not to be shared! So here is the photo of Mike’s amazing trophy that was presented to the band members back in the 90s: 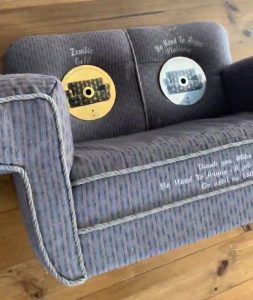 We can easily imagine that we’re not the only ones today who wish we owned a mini Alf Garnett Suite… are we? 😀

That being said we trust our readers to show respect and common sense, and to refrain from trying to contact Mike who’s unlikely to sell his awards…

Special thanks to our favorite bass player for sharing this with fans!