You are here: Cran World » Archives for

Ok, Ok, I got the setlist from the Flordia show.. Check it out!!

ALRIGHT!! They’ll be doing “Go Your Own Way”, “God Be With You”, “Dying In the Sun”, and “Just My Imagination” this tour — all of which were not previously done live. Wow. Glad I got something to look forward to..

Hey, check out this new Bury the Hatchet ad I dug up..

As you can see, it shows the infamous BTH “Red Room” shot, while down at the bottom, the ad boasts all the new awards that the album has received… interesting. Anyway, this is what’s known as a “Trade Ad” and is passed around to those in the music industry and is not available to the public.

Don’t let this stuff burn a hole in your monitor!

The Cranberries Guest Star on “Charmed”

The Cranberries will appear on November 4th as guests on the TV show “Charmed”. “Charmed” is a TV show aired on the WB network worldwide and also airs on CTV in Candada.

Dolores O’Riordan, lead singer for the Cranberries will appear in the 2000 Campaign ads for the ultra-hot clothing designer, Calvin Klein. (WOW! Can’t wait to see the results of that photo shoot!!)

Also, here are some excerpts from that press release:

“You’re working and you’re working, and every day it’s just so busy,” she [Dolores] explains. “I guess that’s how you get to be such a successful person, but then you lose touch with so many other things. I think you get to a point whereupon you kind of realize having a balance in life, having friends and having family, is
better.”

This new quote was featured in a Yahoo! new article:

“When you have kids, it’s almost like a natural step in life that you come to an awareness that ‘I’m not going to burn myself out anymore.’ … You get a little bit more focus on the really important things in life, you know?”

— singer DOLORES O’RIORDAN of the Irish rock group THE CRANBERRIES, on her newfound experience as a mother.

The Berries will be featured on an upcoming movie, “Another City, Not My Own”. The movie itself is based on a book by Dominick Dunne and and it is directed by Robert Altman. The soundtrack will be released this year sometime, but the exact date or song is unkown.

Thanks to Vance (VPegado@aol.com) for submissions for today’s news!

August 4, 1999  |  Comments Off on MuchMusic TV Appearences  |  by Zombieguide Archives  |  The Cranberries

Two shows featuring the Berries are lined up to air this month.

Tuesday, August 10th, 9 PM EST — “The New Music” is rerunning a recent interview with Dolores and Feargal (I would presume the one that orignally ran Janurary 15th)

Thursday, August 19th — The Cranberries will be featred on “MuchMusic Spotlight” – a show playing music videos of highlighted bands.

This page was updated yesterday, but appearently, the updates didn’t save. Well, then it looks like you get a big batch of news!

TV commercials are currently running in the New York area for the Jones Beach concert this month. The commercial includes video clips of Dreams, Promises, and other videos. But the most interesting part of the commecial is professional video footage of the Hamburg Germany concert from this year.

I *finally* got ahold of a scan of a new BTH tour shirt! Interestingly enough, this is actually a crew shirt. Check it out! 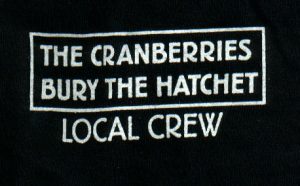 August 3, 1999  |  Comments Off on Limited Edition AI Single  |  by Zombieguide Archives  |  The Cranberries

A limited production of “Animal Instinct” is scheduled to hit stores August 24th in France. The single will inlcude the following bonus tracks:

“Just My Imagination” has finally been given a release date. According to Mercury Records in Germany, the single will be released on September 20th. No track listing or cover art available yet..

Dolores Plans for the Future

August 3, 1999  |  Comments Off on Dolores Plans for the Future  |  by Zombieguide Archives  |  The Cranberries

Dolores recently told British press about her plans later in life — to start a foundation for abused children.

“Warped things do happen in Ireland and what they used to do to children was terrible. It wasn’t just the Church, it was the beatings in school, too. But I was very lucky. I was never abused as a child. I have a very lovely upbringing,” Dolores told London magazine, Metro. She later goes on to say, “Why would anyone want to screw a child? When my little boy falls and hurts himself he cries and looks at you to take away the pain. And you feel awful if you can’t.”

She also told Hot-Press (on the issure of child abusers), “It’s the worst crime. I think they should be castrated. I just think that people who sexually abuse children get off too easily. They get back after a couple of weeks because, ‘Oh, he’s psychologically ill.’ Which I can understand, but then people get thrown in the can for eight years for smoking dope or something. I think the system is kind of weird that way. It hammers people wo are doing harmless things while these perverts, these paedophiles, are shown leniency.”

Well, it seems that “Just My Imagination” is getting some decent airplay around the world.

Many people have heard it playing on stations they didn’t hear “Promises” or “Animal Instinct” played once, so maybe this single will do more success than the preceding ones.

Recent cable guides have listed the Cranberries’s “Hard Rock Live” performance for August 21st at Midnight (probably EST). The show will be aired on the MTV-for-adults, VH-1.

I would take this information as accurate, so mark you calenders!

July 23, 1999  |  Comments Off on More Webcasts Announced for Loud and Clear Tour  |  by Zombieguide Archives  |  The Cranberries

Check this out from the Walzing Back homepage:

“LaunchLive and IPIX images are going to make it possible to see The Cranberries live in concert via the internet while they are touring this summer. IPIX images has develloped [developed] a new technology that enables web-surfers to see imersive 360 degree videos. Their isn’t a lot of information released about this yet but I do know that you will need a Pentium 3 processor, a version 4 of Internet Explorer or Netscape, an Internet connection and a free membership from LaunchLive available here.”

You’ll need to go to www.launclive.com for the free membership.

The Cranberries have booked a new upcoming TV peformance.

The Cranberries are scheduled to perform “Just My Imagination” on the Tonight Show with Jay Leno on September 15th — the night before the LA concert.

Thanks to Hadi Izadi (hadi@interchange.ubc.ca) for the news tip!

Wow! No sooner do I put the below news up, something new comes along.

Promo Singles for “Just My Imagination” have been made and released to radio stations. There is only one track.. (No “alternate mix” goodies)

As soon as I get a scan of the new promo, I’ll try to have it up right here for ya!

Non-singles do well on Foreign Charts

Well, alot of people think that BTH is the Cranberries’s most single-ready album and here are some interesting stats to prove it:

Now, I love “What’s On My Mind” (my favorite off the new album) but ranking it on a national chart without it being a single?! That says something.

You know, it seemed fishy to me from day one. The song “Alone” that has been passed around the net in MP3 and by collectors on tape, is a ruse (aka fake, forgery, lie.. you get the point). In fact, the CD called “The Great Irish Instrumental Songs” does not exist either… along with the tale about Pearce Gilmore selling the song. This was all a semi-well-done hoax put on by one member of the Yesterday’s Gone Page en espanol. The version of the song “Alone” that you may or may not have heard was actually a Stone Temple Pilots song titled “Press Play”.
This was all posted on a very long editorial on the respective page within the past two days. This does not mean that all info. from YGP is illegitimate, as the site has three webmasters. The site does have contacts with Pearce Gilmore, but the information given by the one bad apple that pulled all this on is is false.
From now on, the page will confirm any news posted on its site.

And the US Fans Rejoiced.

“Hi there,
Well I just got back from Italy where I spent three weeks relaxing with my wife. Dolores was in Canada for a few weeks with her husband and son; Noel and his wife went to the Caribbean and Mike and his wife were in Portugal. Everyone had a great time and the “batteries are recharged”.
Our tour manager is getting married in a few days so that should be a good day out. We have decided to release “Just My Imagination” in the U.S.A., so we will be doing the video for that at the end of this month, and then we go to Florida to rehearse for a week before we begin our U.S. Tour. That’s about it I’m afraid (I’m so boring aren’t I ?). Talk to you soon,
All the best,
Fergal.”

So “Just My Imagination” WILL be the next singe (Ok, I was wrong) and best of all — A US release!!