As you might remember, Dolores was due to perform at “Concerto di Natale” in Italy last year but her name was taken off the official website (concertodinatale.it) at the last minute.

According to the RomaToday (romatoday.it), Dolores should be part of this year’s edition which will take place at the Auditorium Conciliazione in Roma. 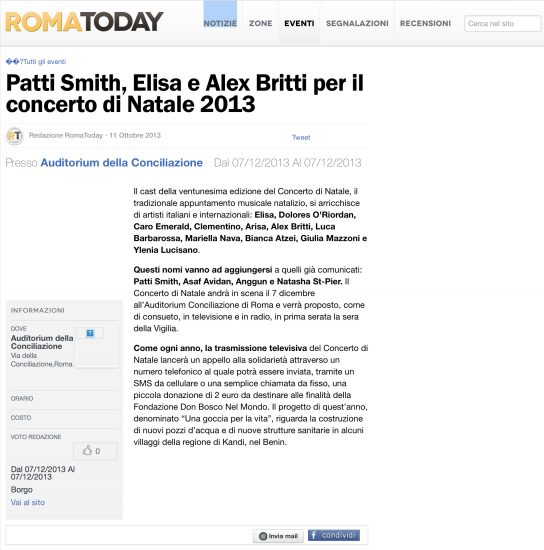 As for the official website of Concerto di Natale nothing has changed yet and their homepage’s banner still does not include the name of Dolores.
Hopefully soon…

Thanks to Irishsoul for the info.

CONFIRMED. As reported 3 days ago (October 20th) in our news about The Voice, Dolores will sing at “Concerto di Natale”. It is now officially confirmed on the Facebook page of the event but not yet on their website! Probably just a question of time as nowadays only Facebook seems to count!

As usual the show will be pre-recorded (Saturday, December 7, 2013 at 7:00pm-10:30pm) for a later TV and Radio broadcast in Italy. All those who’d like to go can get tickets on the official website.

Finally Dolores O’ Riordan appeared today on the official website… and it was worth the wait!
The homepage slides 2 brand new banners: one with all the artists’ names including Dolores’ and another one entirely dedicated to her. Have a look: