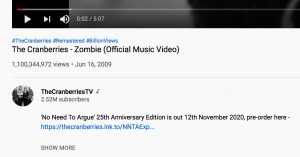 iTunes made the song available for 69 cents. As a result, it got back on Billboard charts, not just arriving at its peak position on the hot alternative songs charts (#13) on 9 April 2021,

Thanks to Seamus and Benjamin Alexander for the info and screenshots!