As we all noticed recently, since Dolores O’ Riordan has been taking part to the reality television singing competition “The Voice of Ireland”, Irish medias keep on digging information about her.

After revealing that she was about to launch court action against Noel Hogan about two weeks ago, the Independent.ie (as well as Irish Mirror) shed a light today on her childhood in a most unexpected interview in which she confesses that she was sexually abused as a child.

The full interview will be available in a few hours this Sunday (it’s almost 3:00 AM Irish Time right now) in the Sunday Independent’s Life Magazine. The ePaper version can already be downloaded for €2.80 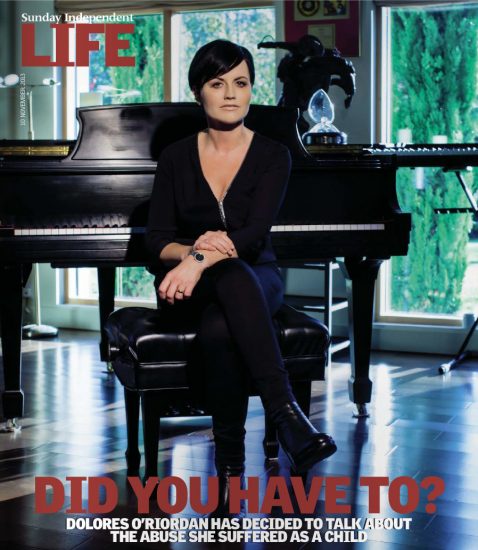 Dolores on the front cover of “LIFE”

This is obviously the first time Dolores explicitly mentions such a fact:
Even though she had already spoken about the trauma she suffered from during her relationship with Mike Mahoney, the abuse she recently spoke of “started when she was 8 and continued until she was 12“, which shows this has nothing to do with the physical violence her domineering boyfriend used to impose on her.

Regarding from what we understand of the song “In The Garden“ off the album “Are You Listening?” released in 2007, it seems that Dolores had tried to speak indirectly about what she calls her “little dirty secret” before. Indeed, back in 2007, some of us, fans, analysed the lyrics and suggested the following lines could refer to some of her childhood memories which pointed to such a possibility:

The theory could never be confirmed, even though the song “Skeleton” off the album “No Baggage” released in 2009 provided more clues with lines such as:

It seems that Dolores has been pondering over what she considers as a “skeleton” a lot recently, hence the revelation that came today. Indeed, she explains she hadn’t seen her abuser for years until she saw him at the funeral of her father two years ago, which brought back the demons of the past as she was about to start a new tour. Dolores then emphasizes the depression she went through on the 2012 world tour, saying “I worried that I might not make it through it“, some facts that created a special atmosphere at these gigs that some of us, fans, could unfortunately feel.

By opening up to her fans via this interview, Dolores hopes that she’ll be released from this trauma, hence the necessity to speak about it and justify some of the songs she wrote in order to heal and move forward.

7 Responses to BREAKING NEWS: Dolores sexually abused as a child